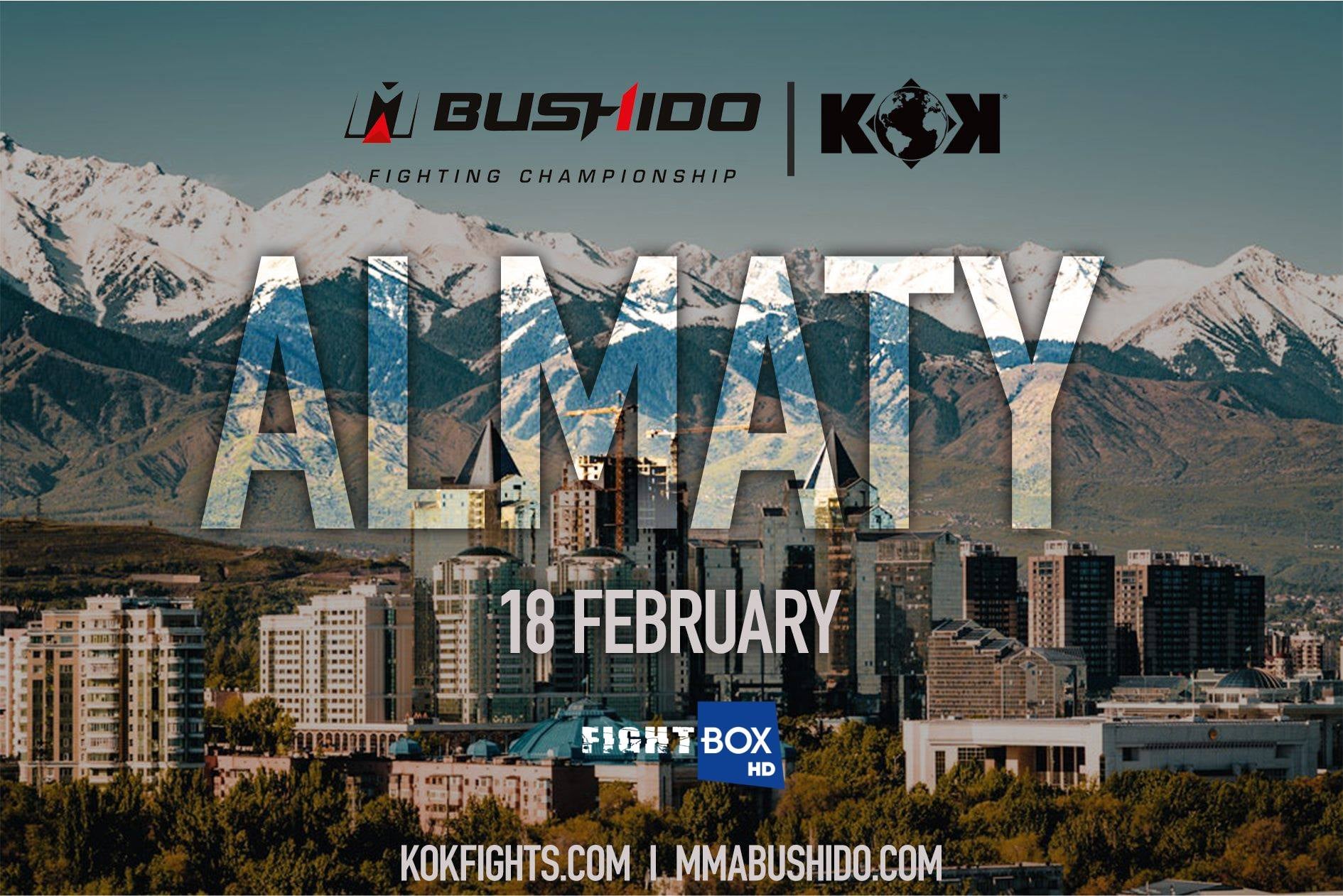 KOK returned to Kazakhstan for a huge MMA tournament promoted by its MMA affiliate, MMA Bushido.

16 Kazakh MMA warriors battled it out for the MMA Bushido Kazakhstan Title, with the winner also receiving prize money and a new car. The event was broadcast worldwide on FightBox HD.

It was a wild night in Almaty, Kazakhstan’s largest city. The tournament saw exciting knockouts, an action-packed boxing match, and dominating takedowns and ground and pound by MMA Bushido Kazakhstan champion Serik “The Destroyer” Tlekeev.

After winning his round of 16 match (which wasn’t shown on the FightBox HD broadcast), Tlekeev pounded his way to a second-round TKO win over Adilzhan Sandibekov. The bout was halted with Tileev punching away from high mount with just one second left in the round.

The effects of previous battles showed on both men’s faces. Kuanyshbaev had a huge swelling under his right eye after he was rocked with punches and nearly lost against hard-hitting Sanzhar Tazhiyev in the quarterfinals.

In the championship final, Tlekeev takedowns and ground control again earned him victory. Kuanyshbaev didn’t take a lot of damage from the bottom, but wasn’t able to create much offense either standing or on the ground.

A jubilant Tlekeev broke down in tears during the post fight ceremony after he was presented with the MMA Bushido Kazakhstan belt.

In the night’s only KOK Kickboxing bout, Russia’s Andrey Bibikov scored a third-round knockout against Ilya Bulavintsev, a Kazakhstan Muay Thai champion. Bibikov found his rhythm in the second round, and stunned Bulavintsev with a body kick for an eight count.

He closed the fight in dramatic fashion a round later. During an exchange, Bibikov landed a huge right hand that felled the Kazakhstan fighter.

Bulavintsev gamely beat the count but the referee gave him the ten-count and halted the bout.

Tonight was KOK’s second visit to Kazakhstan. Both events have featured big tournaments and plenty of action, and hopefully the promotion returns to the Central Asian nation soon.

Moments from press conference in Turkey

Moments from Press Conference in Tallinn !